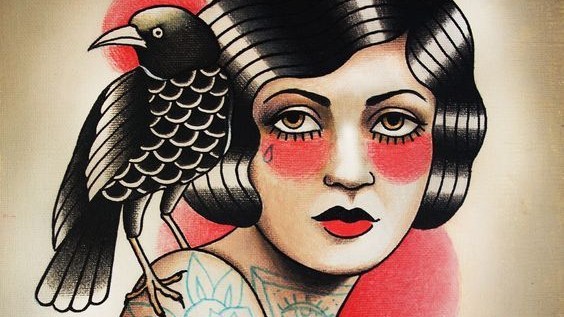 Every tattoo fan is always on the lookout for cool new designs. Of course, sometimes “new” isn’t really new at all.

For example, the traditional portrait illustration tattoo is making a major comeback. Why is that? Because it’s a blend of something old and something new.

Wondering what’s up with this mixture of vintage and new? Keep reading to discover our comprehensive guide!

What Is a Portrait Tattoo?

Image from The Tattoo Movement

It’s relatively simple. In fact, it’s all in the name: a portrait tattoo is a portrait of someone rendered in ink. And these traditional portrait tattoos are usually characterized by an attempt at photorealism.

Such tattoos are typically inked in darker colors such as black or gray. This gives them a vintage look, though these tattoos are very easy to mess up.

Think about all of those “worst tattoo” lists you’ve read over the years. Chances are they were filled with bad portrait tattoos that didn’t look anything like the actual person.

What Is a Traditional Illustration Portrait Tattoo?

As we mentioned, the danger in a traditional portrait tattoo is the photorealism aspect. If anything about the design, color, or textures is a little bit off, you end up with something creepy or silly instead of something deep and moving.

A traditional illustration portrait tattoo manages to sidestep this potential pitfall by ditching photorealism altogether. Instead, these tattoos blend the portrait likeness of someone with the kind of colorful and stylistic elements you’d find on old pin-up posters.

A well-done illustration portrait tattoo will definitely stand out in the crowd. In fact, there are several good reasons why you should steal this ink idea for your very own.

What Makes These Tattoos So Hot?

One reason these tattoos are so popular is the “return of retro.” In recent years, everything from Mad Men to Stranger Things has glorified the groovier parts of years gone by. These tattoos, in evoking World War II-era pin-ups, taps into a whole new vein of nostalgia.

These tattoos also offer both you and the tattoo artist a lot more creative freedom than a traditional portrait tattoo. With those tattoos, there is little room for color or creativity: the tattoo either looks like the person or it doesn’t.

With an illustration portrait tattoo, you don’t have to capture someone’s exact physical features. Instead, you are capturing their “essence”–their personality, charm, wit, and so on.

Finally, these colorful tattoos are more suited to different skin tones and fashion senses. The gray of a portrait tattoo doesn’t look awesome with every person, but these illustration tattoos come in every color that you can imagine.

The Traditional Illustration Portrait Tattoo: The End of The Line

Now you know a bit more about this “new” tattoo trend that channels a very big “back in the day” energy. But do you know where you can learn about even more emerging tattoo trends?

Be sure to return to Tattooing 101 each week as we bring you even more awesome ideas and inspiration from the world of ink!