Ötzi and the World’s Oldest Tattoos 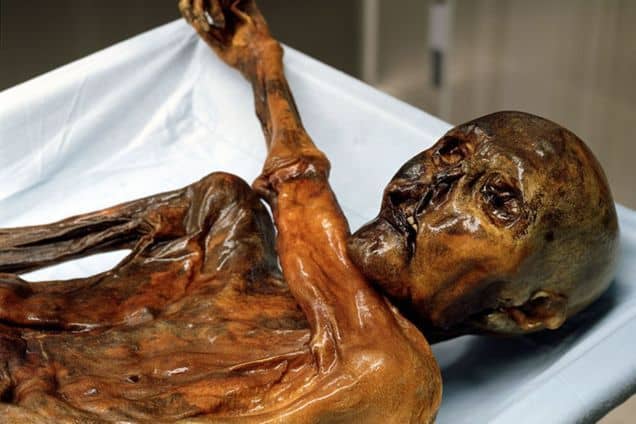 If you have tattoos, you’ve probably had “concerned” friends and family ask that annoying question: “what will those tattoos look like when you’re older?”

It turns out we now have evidence that they’ll look pretty damn cool. And it’s all thanks to Ötzi the Iceman!

Want to learn more about this ancient dude and his dozens of tattoos? Keep reading to discover all his secrets!

Relatively speaking, Ötzi was discovered a long time ago. A couple of tourists in the Italian Alps found his remains inside a glacier back in 1991.

It turned out that he was older than anyone imagined: 5,300 years old! Furthermore, he was absolutely covered in tattoos.

The latest estimate has Ötzi at a whopping 61 tattoos. While that’s cool in and of itself, it turns out that these tattoos really tell his life’s story.

Obviously, many people get tattoos for different reasons. Some people are honoring loved ones or memorializing the past. Others just want to look really damn cool.

It turns out that Ötzi’s main tattoo goal may have been a happier and healthier life. Some of the scientists studying the iceman found that many of his tattoos (made with charcoal, incidentally, instead of ink) line up with popular acupuncture areas on the human body.

Now, scientists cannot be absolutely certain of this because of the extreme age of the body. But some researchers are convinced that Ötzi’s tattoos helped him receive acupuncture. This is pretty wild because that would mean Ötzi was getting acupuncture over two thousand years before the first known use of that particular therapy!

For the longest time, scientists struggled to find out exactly what time period Ötzi belonged to. It turns out that his tattoos may have been an important clue pointing to the answer.

Even if he and his people didn’t practice acupuncture, it’s clear that the tattoos mark areas where his body was suffering. This meant that his people were interested in studying and ultimately finding ways to treat the human body.

That extended beyond the tattoos as well. His body was found with fern in his stomach (possibly used to treat issues like tapeworms), and his tools had special fungi tied to them that may have had antibiotic purposes.

All in all, it looks like Ötzi is a relic of our Copper age, and he (and his tattoos) have helped us understand that time period.

Something Just for Show

Earlier, we mentioned that Ötzi had 61 tattoos. And it looks like most of them line up with areas where he was suffering and needed medical help.

What about the final tattoo? More recently, scientists discovered several tattoos clustered around Ötzi’s heart. And as near as they could tell, this area was not in bad shape like the other areas were.

While it’s possible that these tattoos were meant to treat something we can no longer detect (like mild chest pain), there is another possibility. Maybe Ötzi discovered how awesome chest tattoos could look thousands of years before Millennials would perfect the look?

You’ve learned a lot about Ötzi the Iceman and his cool tattoos. But do you know how to stay on top of the latest news in the world of ink?

Be sure to bookmark Tattooing 101 and visit us every week for news, reviews, and unforgettable articles!