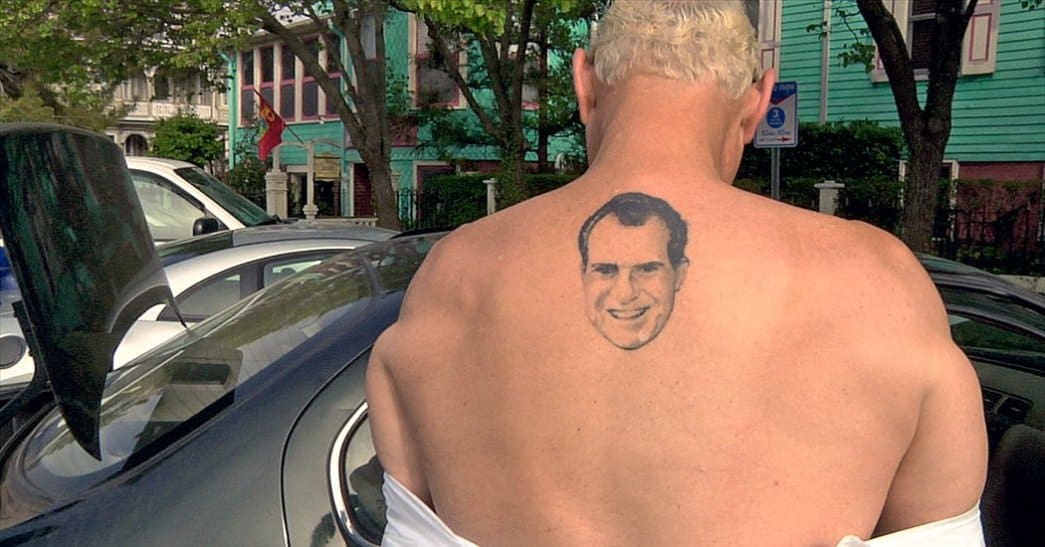 Image from the New York Times

Here at Tattooing 101, we like to stay out of politics. As far as we’re concerned, we’ll stick to ink and politicians can stick to empty promises!

Every now and then, though, the worlds of politics and tattoos collide. And that’s the case with Roger Stone.

This former aide to both President Trump and President Nixon recently made news when he was arrested as part of Robert Mueller’s investigation. However, the real news is his giant Richard Nixon tattoo!

Want to know how this weird Roger Stone tattoo happened? Keep reading to learn the secrets!

Why a Nixon Tattoo?

Image from the Miami Herald

Generally speaking, Richard Nixon isn’t a beloved American icon. So why would Roger Stone bother to get a super-prominent tattoo of a disgraced former president?

The short answer is “loyalty.” Stone helped get Nixon elected and then worked as part of Nixon’s administration. And even all these years later, he’s the first to defend Richard Nixon as both a man and a president.

You can certainly argue with his politics. However, it’s hard to disagree with the idea we should all be lucky to have friends this loyal!

More Than a Tattoo

Image from the BBC

There is a Netflix documentary entitled Get Me Roger Stone that gives us a look inside Stone’s home. In it, we see a Man Cave…but one unlike anything you’ve seen before.

The room is all about Nixon. We’re talking campaign photos, posters, and even some Nixon-inspired bongs!

While loyalty is all well and good, the question remains for many people: what was actually good about Nixon in Stone’s eyes? Why would he immortalize “Tricky Dick” with a Richard Nixon tattoo?

To hear Roger Stone tell it, Nixon is actually a weirdly inspirational figure. According to him, Nixon is a vivid reminder that life will knock all of us down from time to time. And the important thing is to get back up after it happens.

It’s quite possible Stone is the only one who sees Nixon like that. But hey–we’ve heard weirder inspirations for wild tattoos.

For many years, tattoos on the back have been associated with intimacy. These aren’t the tattoos that just anybody is going to see; instead, that sight is typically reserved for someone who sees you with your shirt off (just ask anyone with a so-called “tramp stamp” on their lower back).

You might be wondering how Stone’s romantic partners feel when they see Nixon staring at them from his back. According to Stone, the tattoo is a major hit. In his unfortunately memorable words, ladies love to hear him say, “You’ll never meet another man with a dick in the front and a Dick in the back.”

Wild quotes like that are just one more reason that Stone is a fascinating figure no matter what your politics are!

Now you know the story behind that wild Roger Stone tattoo of Nixon. But do you know where you can get the rest of your crazy tattoo news?

Be sure to bookmark Tattooing 101 as we bring you all the weirdest and wildest news from the world of ink!