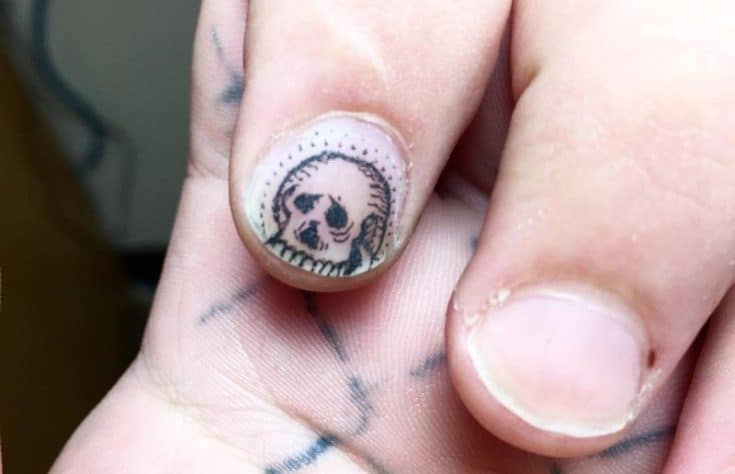 We like to bring you the latest in tattoo trends every week. This week, we’re shining a spotlight on something truly special: fingernail tattoos.

Most kinds of tattoos are easy to understand. However, these tattoos come in many different forms, and plenty of people get them for different reasons.

Ready to learn more? Keep reading to discover the secrets about fingernail tattoos!

How do fingernail tattoos work? The most basic ones work exactly the way you would think: the tattoo artist puts the ink on a person’s fingernails instead of their skin.

There are a few big benefits to this kind of tattoo. First of all, it’s pretty painless: most people compare the process to removing nail polish. So, if you’re skittish about tattoo pain, this can be a good tattoo to get.

And second, these tattoos are very eye-catching. People will notice your colorful fingernails right away. If you are someone who likes to move their hands a lot when you talk, then the effect can be absolutely dazzling.

There is one obvious downside (though to some, it’s more of a blessing). Your fingernails are constantly growing. Therefore, no fingernail tattoos will last all that long. Within a few months—maybe less—no one will ever know you had a tattoo there.

Some people opt for a more extreme version of fingernail tattoos. These tattoos are actually underneath the fingernail instead of on top of it.

The biggest issue with this kind of tattoo is that your nail needs to be partially or fully removed first. While it’s possible to have a medical professional do this for you, most people who get tattoos in their fingernail bed do so after a damaged nail falls off.

Finally, consider the obvious fact that the nail will eventually grow back. If you want to keep such a tattoo visible to other people, you’ll need to continue removing the nail.

So far, we’ve focused on people getting tattoos over or under their fingernails. But these tattoos can be especially useful for those who don’t have fingernails at all!

Recently, Mark Bertram’s story (and his tattoos) went viral. Basically, he had two fingers that had been surgically shortened after an accident, and those shorter fingers lacked fingernails. He felt self-conscious about people looking at his hand.

That’s when inspiration struck. He had a local tattoo artist tattoo some fake fingernails directly to the ends of his fingers. And Bertram’s story has helped make the tattoo artist famous.

His ink was done by Eric Catalano. Previously, Catalano had used art to reconstruct nipples and areolas on cancer survivors. Thanks to the fingernail tattoos, he’s now got a rep as a body mod expert!

Now you’ve learned more about fingernail tattoos. But do you know where to learn about even crazier tattoo stories?

Be sure to bookmark Tattooing 101 to stay up to date on all things ink!